I love decorating for Christmas, and look forward to it every year.  For the past few years, though, we haven't made much of a deal of it for a variety of reasons.  We were going to do the same this year, until I got a call from my sister asking if her daughters could help me trim the tree.  I was a little surprised since her children are being raised Jewish, but apparently they love ornaments and Christmas trees.  But, could I please have a real tree (we always had artificial ones), and could the ornaments also not be too Christmas-y.  Ummm...okay?  Can you tell that my family is a little demanding?

Since I used to make such a big deal out of Christmas decorating, I had enough ornaments for 3 large trees.  So these "requests" were easily granted, and my nieces had a large selection of ornaments to choose from.  I decided to make this a family event and had my brother's children join the fun.  I figured, let's celebrate early with the kids and then have a quiet, peaceful Christmas week with the rest of my family.

Some lessons I quickly learned when decorating with 2 six-year old girls and 1 independent toddler:
When the tree was done, I really earned the title of Awesome Aunt! 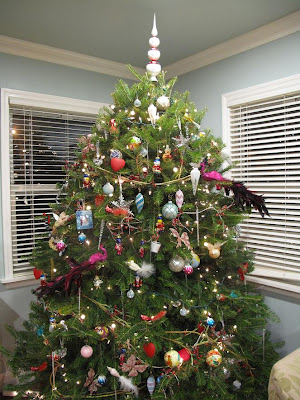 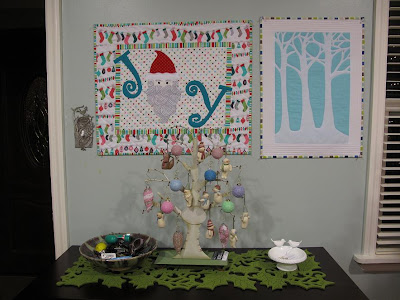 The Christmas quilts I made for the occasion: 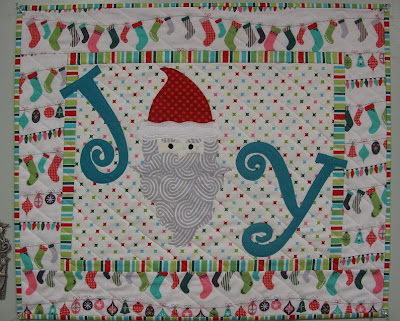 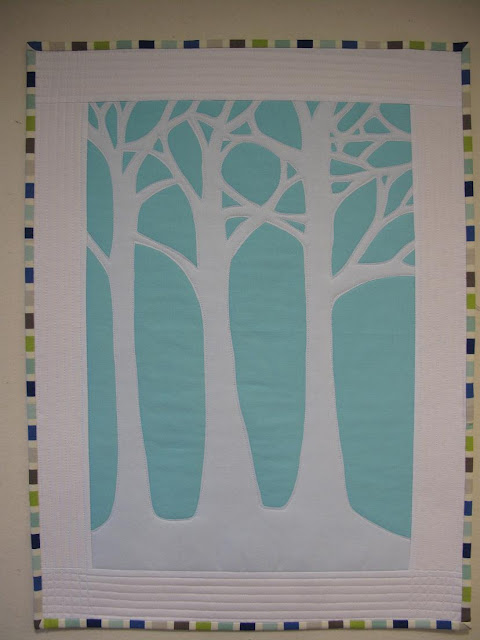 Hope your holiday season is fun and stress-free! :)
Posted by Dorrylu at 2:33 AM 3 comments:

It's been a while, over 5 months since the last time I posted.  I tried to keep it up, but my father had died on Father's Day, and July was a blur of making arrangements so that we could take his ashes back to Vietnam as he had wished.

I was born in Vietnam, but left when I was very young in 1975. We left on the same day that Saigon fell, not intentionally, our plans just happened to coincide with that event on that day.  I don't remember any of it, not even the family members that I was very close to when I was young.  Going to Vietnam was scary for me, made even more so since I don't read or write the language, and speak very little of it.  I understand a bit of it since my parents always spoke to me in Vietnamese, but my understanding is far from fluent.

The trip was also scary because the flight time was 23 hours, and I'm a horrible traveler.  I can't read, watch movies or do anything on any flight.  I just sit there, squished by the people next to me, feeling miserable and looking like the walking dead.  It's not an attractive picture.  But since I hadn't been back to Vietnam in over 30 years, we decided to splurge on the travel plans.  We flew with one of the most comfortable airlines and booked a room during our layover in Singapore's airport while we waited for our connecting flight.  Did you know that you can rent a hotel room in this airport by a block of hours?  Get your mind out of the gutter! LOL! It made our trip much more comfortable because I was able to catch up on some sleep that I didn't get on the flight.  Overall, the trip wasn't bad, especially since Singapore's airport has the most awesome shopping - 3 terminals full.  And no one wanted to touch the ashes, not even the bag they were in, so we went through customs at warp speed (of course we had all the proper documentation!).

Vietnam was an explosion of the senses.  It was really hot and humid because August is in their wet season, but thankfully, we had beautiful, sunny weather for most of the trip.  I was stressed before even leaving because since I started working after college, I had never taken a full month off to go on vacation.  So I had to condense 2 months of prep for the new school year (I'm a principal at a high school) into one month and trust that all would be well and ready to go when I returned.  Needless to say, another reason why I was a wreck.

The first thing that blew my mind was the traffic.  Apparently, there are no traffic laws and with the amount of motorcyles on the road, I am surprised that there aren't more accidents.  Crossing the street is terrifying.  You have to look for a break in the traffic and begin walking and not stop.  The motorcyles will swerve around you, but if you stop, you will get hit by one.  It took a while to get used to, but my relatives usually had to tell me when it was safe to begin crossing.

My father's memorial was beautiful; he would have been very happy to see all his family together.  His ashes were placed in the family's tomb, next to the church that he attended when he was young.  After the memorial, my sister and I traveled to Cambodia and then back to Vietnam, beginning in the north and traveling south to all the places that my father described to us when we were growing up.  It was an amazing, unforgettable trip.

I have a very stressful job, but spending time exploring two beautiful countries and learning more about my heritage was incredibly special and relaxing.  I felt comfortable, which was surprising.  In Cambodia, we had a guide and driver as we explored Ankor Wat, and everyone spoke English.  In Vietnam, people had a good laugh when I spoke, but I still felt comfortable.  I didn't even have the initial anxiety that I normally do when I travel to another country where I don't speak the language.  It just felt comfortable, aided by the fact that the hotel staff in the various places we stayed at were very helpful and accommodating.

When I returned to New York, family and friends and co-workers joked that in addition to the nice tan I acquired, I also had a very nice Zen buzz from Vietnam.  It was an unforgetable trip, and one that I want to repeat.  I'm thinking of returning to Vietnam next August, not only to visit my father's ashes but also to explore some more places.

Here are some of the highlights from the trip:

Ben Thanh Market, Vietnam: the place to shop for tourists! 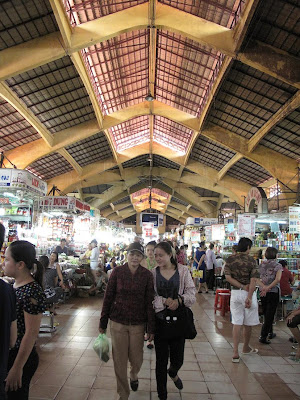 An open market in the Mekong Delta, Vietnam:  No supermarkets in Vietnam, so people generally go the markets daily to buy their food.  Better to buy earlier in the day because there's no refrigeration in these markets! 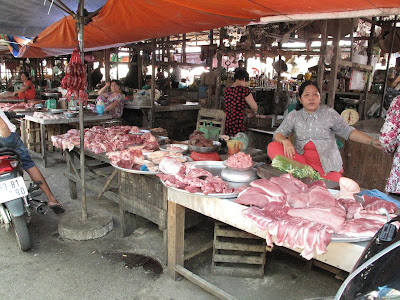 Halong Bay in Vietnam: One of the seven wonders of the world and the most beautiful, serene place. The cruise on Halong Bay was my favorite part of the trip. 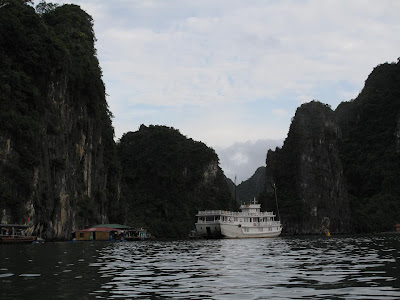 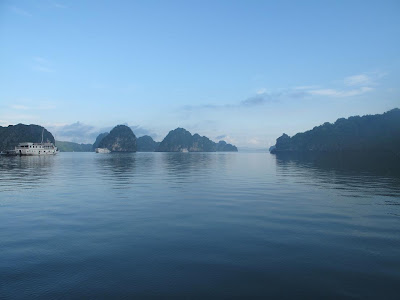 Angkor Wat in Cambodia:  Where all the famous temples are; some are in amazing shape, while others are in disrepair.  Countries all over the world are helping the Cambodians restore the broken temples. 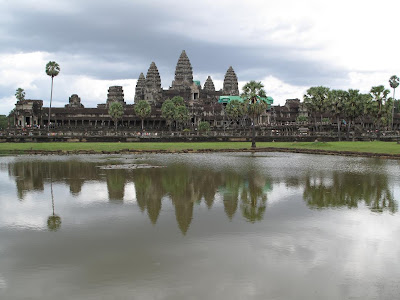 The Floating Village in Cambodia: The village consists of houseboats which are moved based on weather conditions and height of the water. 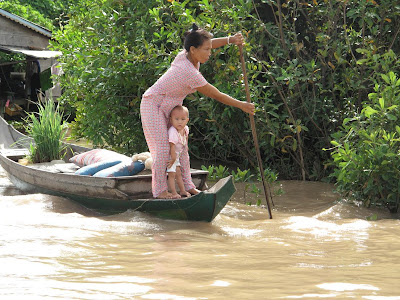 I took tons of pictures, but I figured that showing a few was way better than showing a lot since many of them don't have much meaning to others.

Well, I'm back and have been sewing furiously to catch up, which I finally am.  Got lots to share, but will do so in other posts ....

Dorrylu
Queens, NY, United States
Challenging myself with new ideas and projects and having fun in the process!