Well, can you believe this?  It's the last day of February and I'm already done with all my March blocks for the various virtual swaps that I'm involved with.  It must be the leap year!  The next time I'm this productive will probaby be in four years with the next leap year!  Here goes: 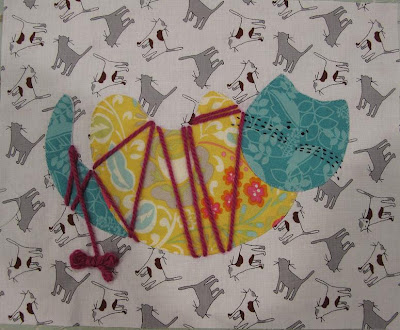 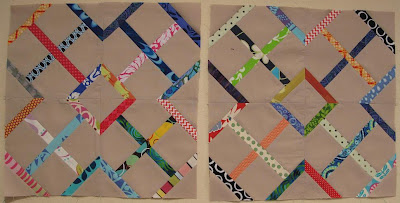 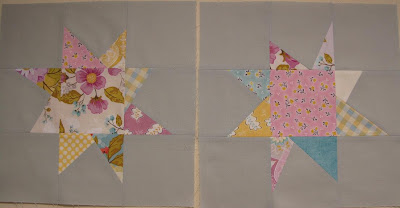 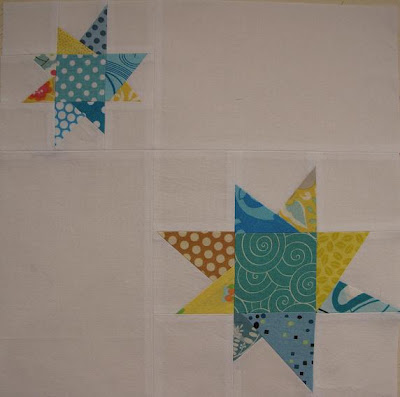 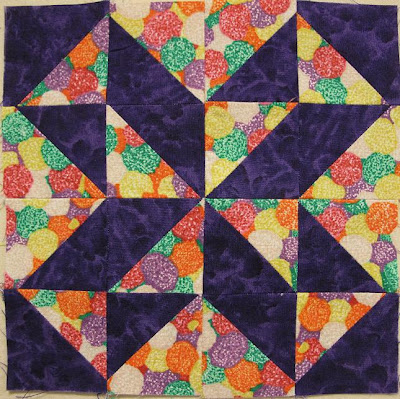 I'm generally not this efficient, so I'm in happy shock! Hmm... too bad this efficiency is not present in other aspects of my life! :)
Posted by Dorrylu at 8:09 PM 4 comments:

I just finished quilting the cat quilt that will be placed on the wall right outside the cat bathroom, which is shown here: 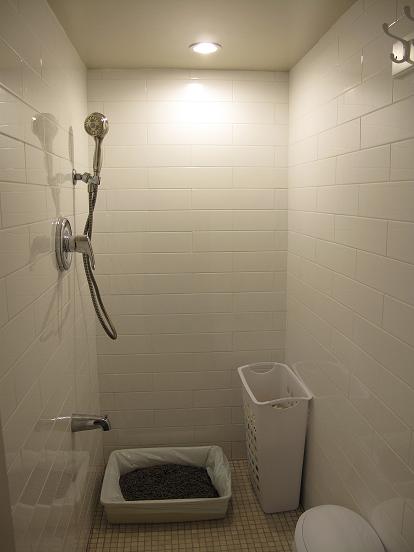 During the renovation of the basement, we decided to put in the cat bathroom next to the basement bathroom.  We have multiple cats, and no matter what products we bought or where we placed the litter box, the cats always made a mess of the area.  What drove me crazy was the flinging of the litter and tracking it everywhere.  So we thought if we kept the litterbox in a contained area that was easy to clean, it would help keep the problems at a minimum.  It did, and was probably one of the best investments we could have made.

Though the room looks simple, it was quite a project.  The concrete floor had to be broken up in order to put in a floor drain, and the pipes had to be redone for both bathrooms in order to add the drain and hand-held shower.  We also added a bathroom fan to help dry the room when we cleaned it, and the saddle of the doorway had to be raised so that we can run the faucet when we clean the bathroom.

And of course, it's the details that give the space its character, so we chose this light switch cover for the bathroom: 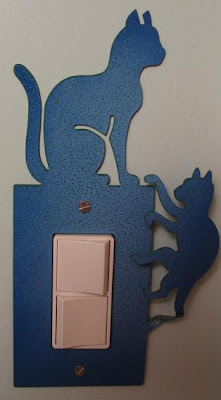 and I made this quilt for right outside the room: 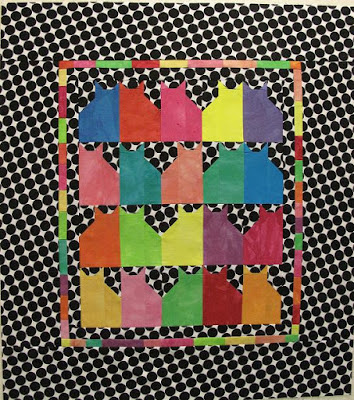 The cats adapted to this room very quickly. It's surprising since our cats never do what we want.  Maybe they like it as much as we do.  :)  It's a great room and has worked out exactly the way we had hoped.
﻿
Posted by Dorrylu at 9:50 PM No comments:

Now that I figured out the fabrics, with a few new additions, I decided to make a prototype of this block both to figure if the fabrics work well together and what to send out.  Since the fabrics have to get to my fellow bee members of the Modern Block Swap 2012 by the beginning of March, I need to send the packages out by the end of this week because I'm going away next week.  (Can you believe that February is almost over???)

I had some concerns about my fabric, but once I made the block, it was amazing the transformation from the basic log cabin block: 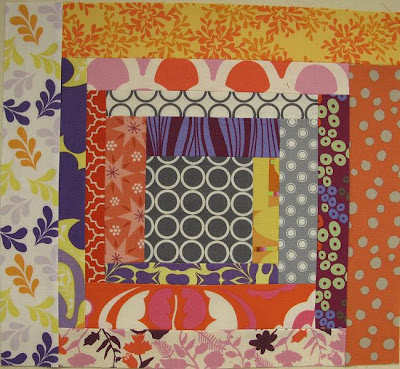 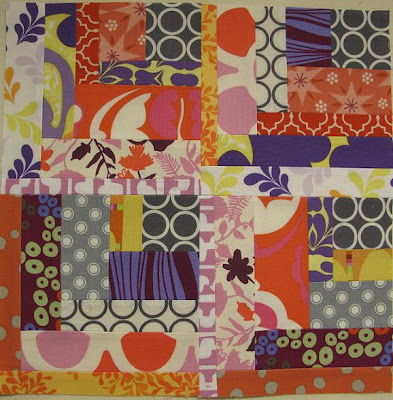 Once I saw this block, any doubts I had about the fabrics disappeared! I love the play of fabrics and patterns, which all seem to go together very well.  By varying the width of the "logs" and making the placement of the orange, gray, and purple fabrics random, it made the final block vibrant and dynamic.  I can't wait to see what the bee members create!
Posted by Dorrylu at 9:10 PM No comments:

I've been collecting orange and purple fabrics for one of my bees, Modern Block Swap.  I'm the bee leader for March and I didn't know how difficult it was to plan this quilt until I tried to.  So I did some research.  After looking at a gazillion block patterns and quilts on Flickr, I decided to make a purple and orange quilt in the quartered log cabin pattern from Block Party.  These are the fabrics so far: 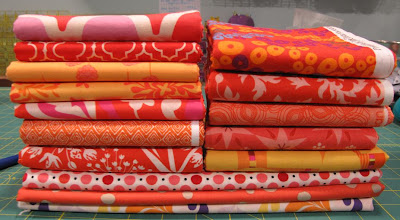 The purple fabrics plus the neutral gray fabrics ... 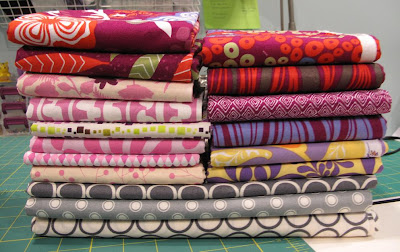 I think the orange fabrics are great, and the gray fabrics will work well with both color families.  I'm concerned with the purples because they're predominantly in the reddish-purple family and I wanted a wider range of purples.  Looks like more fabric shopping ... YEAH!
Posted by Dorrylu at 11:06 PM 2 comments:

In one of my bees, Piece Bee with You, the theme for this month is Under the Sea.  It is a bee based on paper piecing, which is one of my favorite techniques.  This block is my contribution to the theme.  The fish pattern is from Shirley Liby's Paper Piecing Patterns, which is a set of books that I bought at a quilt show years ago.  I never thought I would use it because the patterns tend to be fairly small in size, but I thought it would be an interesting resource.

I'm happy that I finally have a reason to use it.  The seaweed block is a pattern that I designed. 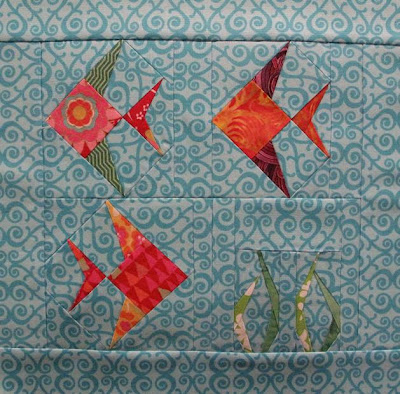 A close-up of the fish: 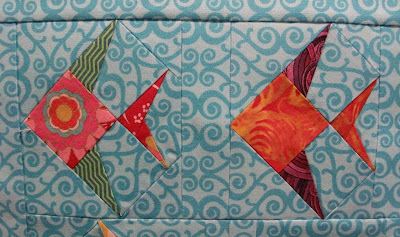 A close-up of the seaweed: 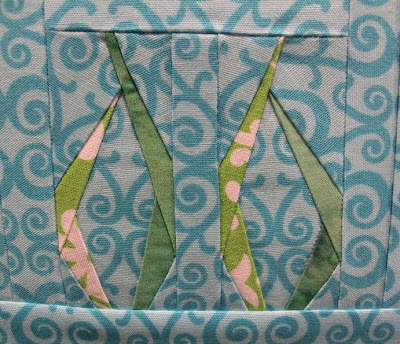 The block is made from stash fabric, and the background is an organic fabric by Kaufman that I thought was perfect for water.

I also like to design siggy blocks that match the blocks.  This is the siggy block for Under the Sea: 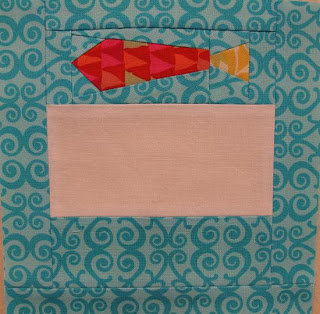 I love that these bees have me work on different patterns that I wouldn't otherwise.  It's definitely been broadening my quilting horizons and it's been fun!
Posted by Dorrylu at 8:12 PM 4 comments:

Email ThisBlogThis!Share to TwitterShare to FacebookShare to Pinterest
Labels: Block Swap - Under the Sea

Year of the Virtual Bees and Swaps

This seems to be my year of virtual bees and swaps.  I just finished my blocks for the Wonky House Swap, the Japanese x and + blocks, and am now participating in 5 monthly bees.  I'm enjoying making all these different blocks and the combinations of fabric that people put together, but it's been challenging.  I'm a procrastinator at heart, and have been surprised at how quickly I'm getting these blocks done and sent.  Maybe quilting is making me more consistent and timely? I hope so!  LOL

However quilting might affect me, here are my latest blocks for February:

Pogo Stick blocks for The 99 Quilting Bee (based on the book, Modern Blocks): 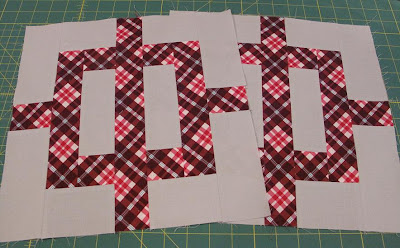 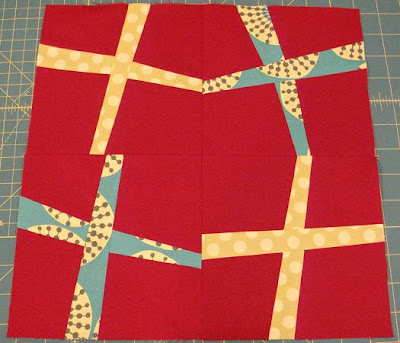 Hope the recipients like them!﻿
Posted by Dorrylu at 9:39 PM No comments:

Dorrylu
Queens, NY, United States
Challenging myself with new ideas and projects and having fun in the process!